“You have power over your mind — not outside events. Realize this, and you will find strength.” Marcus Aurelius


In the wake of the COVID-19 pandemic, businesses lost revenues and workers lost jobs. But because of the time it takes to collect and collate data, economists have been left without much information to quantify the economic impacts at the local level.


But there is one ray of data illumination. Claims for unemployment benefits are promptly available and provide information about a large cross section of the economy. This post will outline what light unemployment claims data sheds on the state of southwest Utah’s economy.


While not all workers are protected by unemployment insurance laws, roughly 95% of jobs are covered. This makes claims data an exceptional source of information about the economy. Not included under unemployment insurance laws are most self-employed workers, about half of agricultural employment, unpaid family workers, railroad personnel (covered separately) and many nonprofit organizations (such as churches). Also, some out-of-work employees may not have worked a sufficient work history to qualify for unemployment insurance benefits, but may file anyway. Fortunately, in this time of economic distress, the social safety nets of the unemployment insurance program, special national COVID-19 funding and social programs are working together to keep workers’ income and well-being stable.

Unemployment claimants and the unemployed; they aren’t the same

Also, keep in mind that, in addition to individuals drawing unemployment benefits, the unemployment rate includes those entering and re-entering the workforce and noncovered groups without current employment. This means the number of “unemployed” will be greater than the number of claimants. In “normal” times, only about 40% of the “unemployed” are claiming benefits. The generally reported unemployment rate also has a work-search requirement. If you haven’t made any minimal attempts to find work, you aren’t counted as “unemployed.”

While this analysis won’t be updated regularly, new data will be added to the data visualization on a weekly basis allowing readers to check back for the latest information.

Not surprisingly, first-time claims for unemployment benefits soared in Utah and across the nation as the pandemic swept across the country. This increase is unprecedented since the creation of unemployment insurance coverage during the Great Depression. Week 12 (beginning March 16) marks the start of this unparalleled surge in claims. On a positive note, while new claims for unemployment benefits have skyrocketed in Utah, the state currently shows one of the lowest claims rates in the nation.


For most southwest Utah counties, initial claims peaked during week 13 (starting March 23) and have since tapered downward. During the peak week 13, initial claims filed totaled 2,364 in southwest Utah. In all of 2019, only 3,803 claims were filed in the region. By week 19, claims measured considerably lower but continued to run substantially greater than in previous years — even during the Great Recession.


Here’s another example of the tremendous flood of new claims. Prior to the COVID-19 pandemic, counties in southwest Utah averaged a total of 82 first-time claims per week. This time period in early 2020 included seasonally high claims weeks in January. In the weeks after, an average of 1,343 claims were filed for an almost unbelievable increase of 1,538%.

Who took the hardest hit?

Counties with a high-dependence on tourism have felt the greatest economic and employment shocks. In Garfield County, with the highest share of tourism-related employment in the state, roughly 20% of individuals covered by unemployment insurance have filed a claim — twice the rate of the state (10%) Moreover, many seasonal Garfield County workers were already drawing unemployment before the pandemic hit. In contrast, in Beaver County, only 4% of covered workers filed a claim during the pandemic. Iron (9%), Kane (10%) and Washington (11%) also felt the repercussions of upswing in furloughs and job loss.

Especially in the early stages of the pandemic, this is a story of tourism-dependent industries. Almost 23% of post-COVID-19 initial claims filed in southwest Utah represented workers previously employed in accommodations and food services. In addition, the true effect of the pandemic on this industry is masked by a large number of claims classified as industry “unknown” in the early days of the claims flood. Undoubtedly, many of these claims would rightfully be classified in accommodations/food services if the appropriate information were available.


Other high-claims industries included retail trade, healthcare/social assistance (reflecting the cessation of elective procedures and visits) and administrative support/waste management/remediation (the home to temporary employment agencies). Many of these high-claim industries reflect their high share of total employment in general. In addition, they often serve the public face to face or encountered damage due to the decline in demand for travel.

While most of the high-claim industries felt the pain of the pandemic early on, other industries surged in later weeks. As the economic effects of other closures worked their way through the economy both manufacturing and transportation/warehousing proved relative latecomers to the layoffs in southwest Utah.

The High and the Low

Although accommodations/food services has generated the largest number of southwest Utah initial claims in the COVID-19 pandemic time period, in percentage terms, other industries have actually suffered more. For example, in the extremely small management of companies industry, roughly 50% of workers have filed for claims. The administrative support/waste management/remediation industries, which includes temporary employment firms, shows a first-time claims rate of 27%.


Public administration, educational services (including public and higher education), finance/insurance and utilities have also managed to keep a higher percentage of their workforces employed. 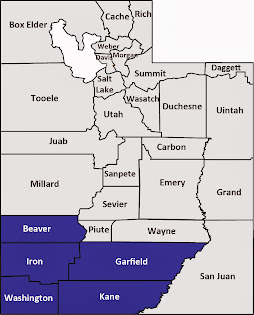 * For Utah's Economic Information only.

Wages and Occupational Openings Data (WOOD) - find wage information, projections data and links to other tools, for all Utah jobs at statewide and selected sub-state areas.

Utah Employment and Wages - search industry employment and wage data compiled by reports that are submitted by employers to the Utah UI program.

Publications - As part of a cooperative agreement with the Bureau of Labor Statistics, we provide the public with the data and analyses that we collect in a variety of mediums about the labor market in Utah.

Visit our main economic information page and find all of these tools and more.